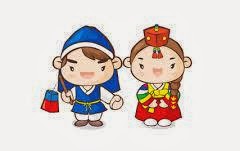 Seollal is Korean for Lunar New Years, the first day of the year in the lunar calendar.

This year Seollal falls on today, January 31, 2014. During the New Year’s holiday season; Koreans go back to their hometowns to visit their elders, relatives, and honor ancestors to wish them a Happy New Year or
새해 복 많이 받으세요 (Sae hae bok man hee bad eu sae yo).
Traditionally, Koreans would wear hanboks and perform ancestral rites, play folk games, eat traditional food, listen to folk stories, and just catch up with their loved ones. As a New Years Day ritual, the younger generation will do “Sae Bae” which is a deep bow to the floor in front of elders especially grandparents, as a sign of paying respect. Seh bae is also given to the deceased ancestors with food and drink offerings, also known as “Charae.” Depending on how traditional a family is, seh bae may just be done by children to the grownups starting with bows to the oldest living generation. In return, children receive envelopes of money and words of wisdom for the New Year.

After seh bae, the traditional New Year's meal is ddukguk (ricecake soup) must be consumed to grow one year older. Adults tell their children that they can't get older unless they've eaten their bowl of ddukgook. Koreans usually spend their New Year’s playing traditional outdoor games like kite flying or noltigi, Korean board games like yutnori (stick-tossing board game), singing songs, and going to festivals. It is a time to relax and enjoy a brand new start with the ones you love.

Posted by Virendra Rathod at 22:42 No comments: 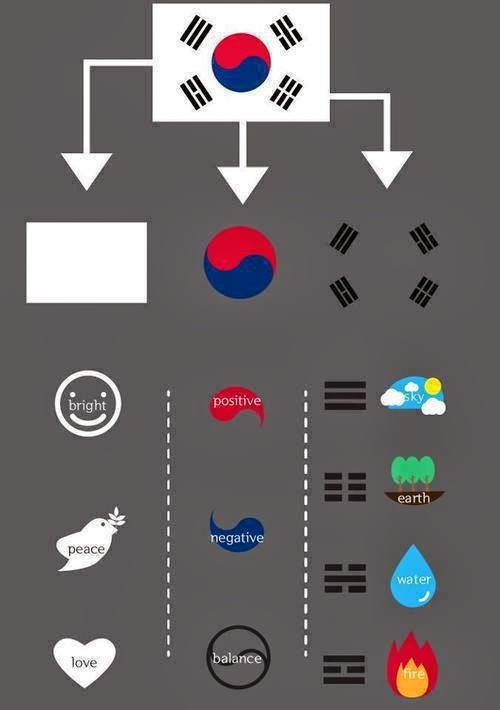 Hello Friends around the world did you guys know that there is a very knowledgeable meaning of the Korean Flag, which is also called Taegukgi (referring to the Yin and Yang halves of the circle in the center of the flag.
Symbolic of the nation is the white background (the land), the circle (people), and the four trigrams (the government). All three make up the essential elements of the nation.


The flag consists of three parts: the white background, the red and blue circle in the center and four trigrams, one in each corner of the flag.
The white background of the flag means peace.  The red and blue circle in the center is called 'Taeguk', the origin of all things in the universe. The central thought is perfect harmony and balance: A continuous movement within the sphere of infinity, resulting in one unit. The blue part of 'Taeguk' is called 'Eum' or in Chinese, Yin, and represents all negative aspects of the balance while the red part is called 'Yang' and describes all the positive apects. The circle itself represents unity - bringing together the negative and the positive, while the Yin and Yang represent the duality. Examples of duality are heaven and hell, fire and water, life and death, good and evil, or night and day
The four trigrams at the corners (called 'Kwe' in Korean) also represent the concept of opposites and balance. The trigrams are heaven (upper-left) and at the other corner earth, water (upper-right) and at the other corner fire. Looking at symbols of the trigrams, you can see that they are opposites as well. Three unbroken bars (heaven) vs. three broken bars (earth), etc.


The current South Korean flag was adopted on January 25, 1950. The Republic of Korea was formed in August, 1948. The flag was designed in 1882 during the reign of King Gojong by the Korean ambassador to Japan. Gojong proclaimed the Taegeukgi to be the official flag of Korea on March 6, 1883.

Posted by Virendra Rathod at 09:55 No comments: 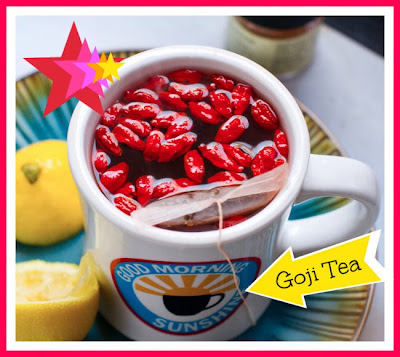 Gugija Cha also known as Goji Berry Tea, is a traditional Korean tisane made from dried wolfberries (also known as goji berries), dates, and ginger. It is a good source of vitamins and minerals, and is believed to boost liver function and help fight fatigue, if consumed on a regular basis. Goji berry (Gugija) is the fruit of a matrimony vine. 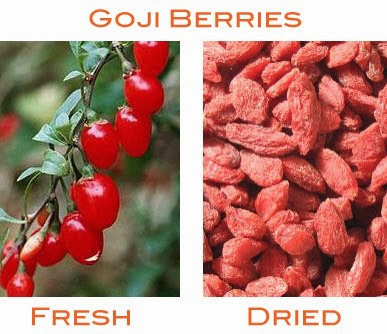 Gugija-cha is known to be a very good source of minerals and vitamins, fighting fatigue, diabetes, back pain and malnutrition. Korean medicine also uses it to help with good eyesight, beautiful complexion, and lung and kidney health, as well as men’s virility. Some say that if you wash your hair in gugija-cha, it can help prevent hair loss.

Gugija has been a very famous cure-all medicine in Korean medicine for many centuries. There is an old Korean folktale about a famous scholar was very sick during his youth. As he grew older, his friend introduced him to gugija and he started drinking gugija-cha everyday. His health improved immensely and he started aging backwards! His white hair disappeared, his eyesight came back, his wrinkles started to disappear, and his energy level was better than ever. From this old folktale, Koreans believe that gugija is a powerful herb, thus commonly used in Korean medicine and cuisine.

1. Add a handful of gugija into your pot full of water.
2. Bring it to boil and put it on medium heat for 5-10 minutes. Must be a nice warm orangey-pink color.
3. Remove berries and add as much honey to your liking.
4. Enjoy it warm tea or and ice or store it in the fridge for a cool drink. 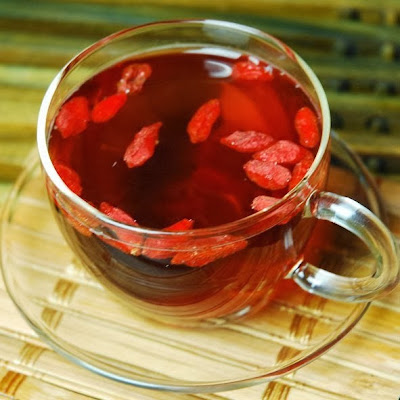 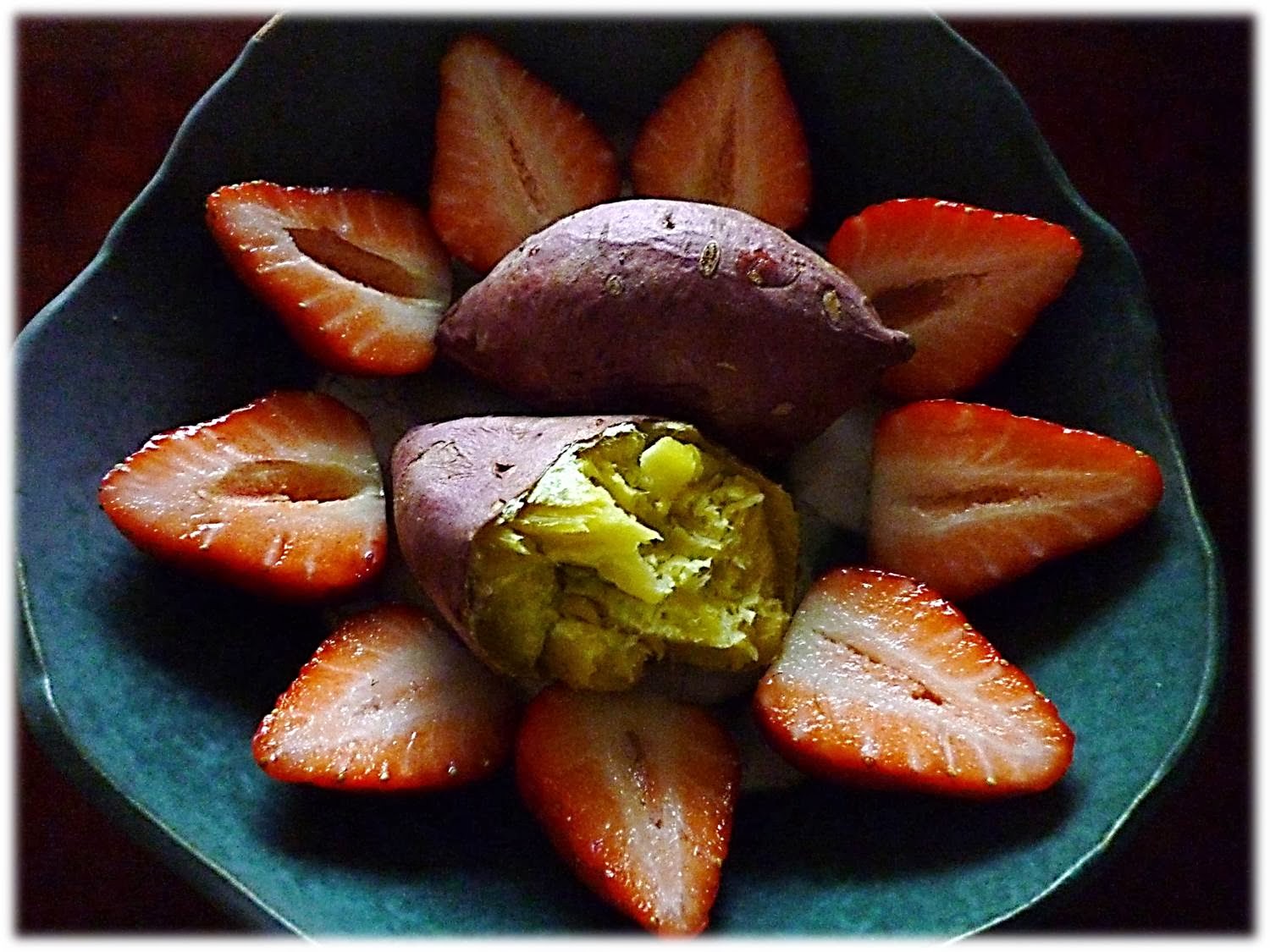 Sweet Potatoes (고구마) or Goguma, are loved by Koreans and are essential snack in the wintertime. Sweet Potatoes are a root vegetable that is large, starchy, and have a sweet taste for a vegetable. Roasted sweet potatoes (군고구마), “Goon Goguma” is a staple winter food in South Korea. You’ll be able to find them being sold on the streets by ajusshis passing out steaming sweet potatoes in a large envelope made from recycled paper. Large metal barrels are actually used to make street-cart ovens with customized trays to roast the sweet potatoes. 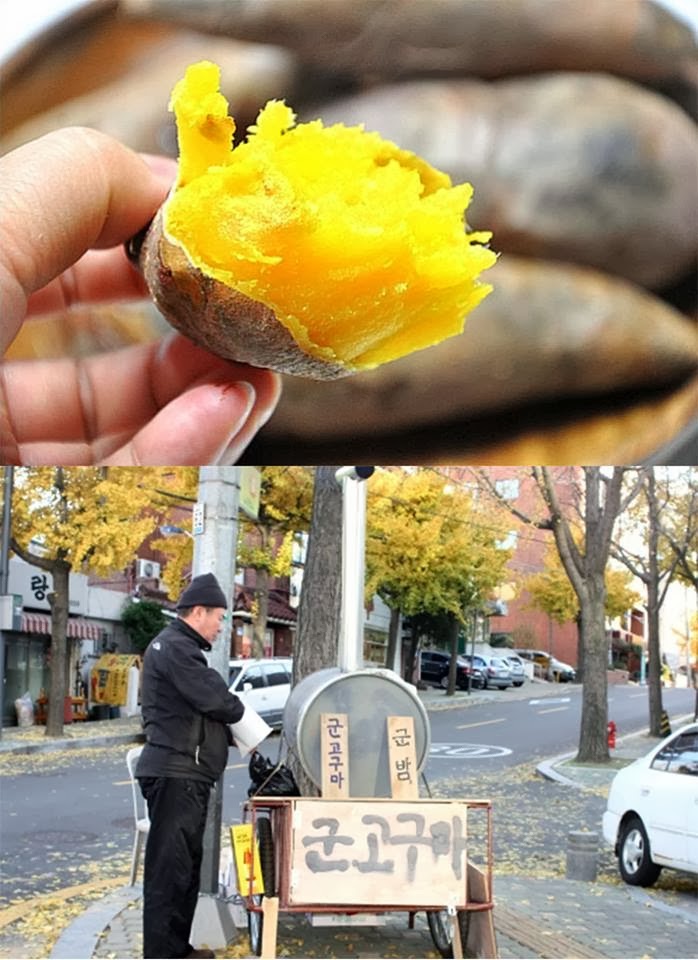 Sweet potatoes are very healthy and beneficial because they contain vitamin A, vitamin C, manganese, fiber, B vitamins, potassium and even iron. Antioxidants in sweet potatoes also have anti-inflammatory properties. The beta-carotene and vitamin C in these tubers work together to rid the body of cancer-friendly free radicals. They are also healthy and great for those who are on diets.

You can also roast sweet potatoes at home in the oven, and if you don’t have an oven, you can also steam them. Sometimes more than a snack, sweet potatoes can be eaten as a meal with kimchi. A very simple recipe below for you to enjoy.

Directions :
1. Rinse and place sweet potatoes in a cast iron pan over low heat.
2. Turn them every 10~20 minutes or so to cook evenly on both sides. (Depending on the size of the goguma, it may take 30 minutes to an hour.)
3. With a chopstick, insert in the goguma to see if it has been cooked thoroughly.
4. Enjoy! ^^ N do let me know :)

Posted by Virendra Rathod at 19:08 No comments:

Did you guys know that Korean Lunar Calendar incorporates seasonal divisions of 24 Jeol-Gi, or “turning points of the season” each on lasting for about 15 days.

This seasonal cycle became a timetable for agriculture created by the ancient Koreans. In order to take care of crops throughout the year, Korea’s ancestors had to understand the weather from spring through autumn. They divided a year into spring, summer, autumn, and winter and each season into a further 6 divisions. This gave Korea 24 seasons (Jeol-gi). All 24 days have its own significance in terms of predicting changes in the weather, and created various idioms associated with seasonal activities.

Although, the Jeol-gi customs and holidays are slowly dying from modern Korean society there are many who still celebrate the traditional customs of Jeol-gi holidays. In January 2014, Sohan is on January 5th and it is called the “Small Cold” although it is the coldest day of the season.

Daehan is on January 20th and it is called the “Big Cold” but it is less cold day than Sohan. Korea’s Ancestors though that Daehan would be the end of the winter and final season of the year. Also, one of the biggest holidays in Korea in the Lunar Calendar is Lunar New Year’s Day (Seolnal) which is on January 31st.

There are only few countries that have four distinct seasons like Korea.
Korea is very thankful and blessed to experience all fours seasons and the different 24 divisions of Jeol-gi unlike other countries and customs.
I hope you also enjoy "Korea’s traditional 24 seasons.”
Posted by Virendra Rathod at 19:32 No comments: