A Korean Rite of Passage: Marriage

A Korean Rite of Passage: Marriage 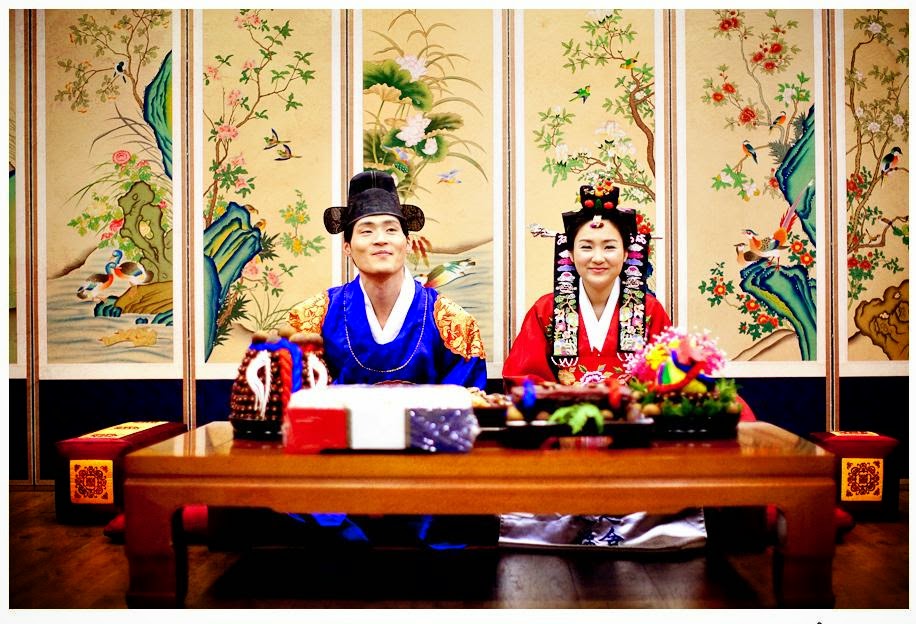 Among the four major rites of passage in Korea, the one that occurs on the grandest scale is marriage. Called honrye in Korean, it refers to the ritual that binds an adult man and woman together in a socially recognized union. Honrye originally consisted of many sub-procedures, but today it is usually conducted in the order of Nappye, Yasik and Pyebaek. Food is prepared in accordance with the nature of each procedure. 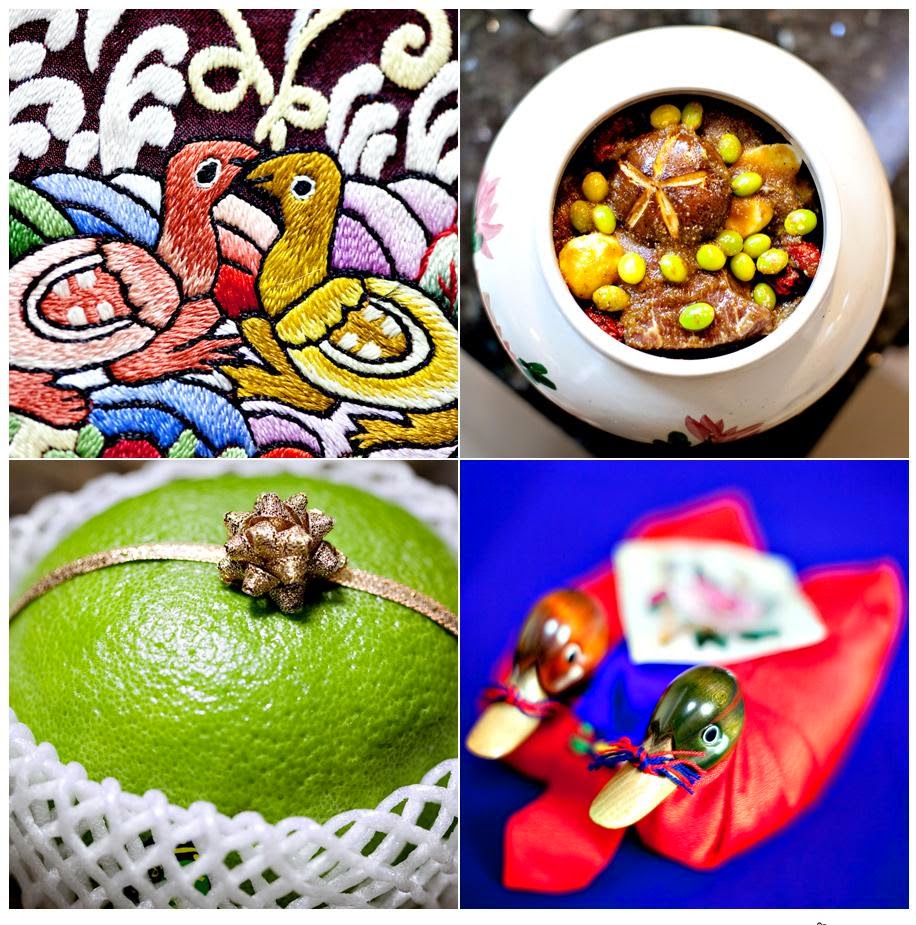 Just a few days prior to a wedding, the groom’s mother sends a decorated box full of food to the bride’s house. Here’s a sneak peek of the box.The procedure called nappye is the sending of the hahm-a wooden crate inside which is the written document confirming the marriage and bolts of silk-to the prospective bride’s home. On this occasion, the bride’s family would prepare a type of tteok (rice cake) called bongchaetteok. The steamed rice cake is made from glutinous rice and was cooked so that it was ready to serve when the hahm arrived from the groom’s family. 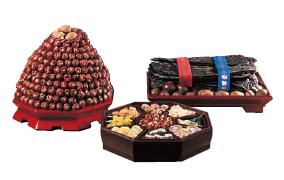 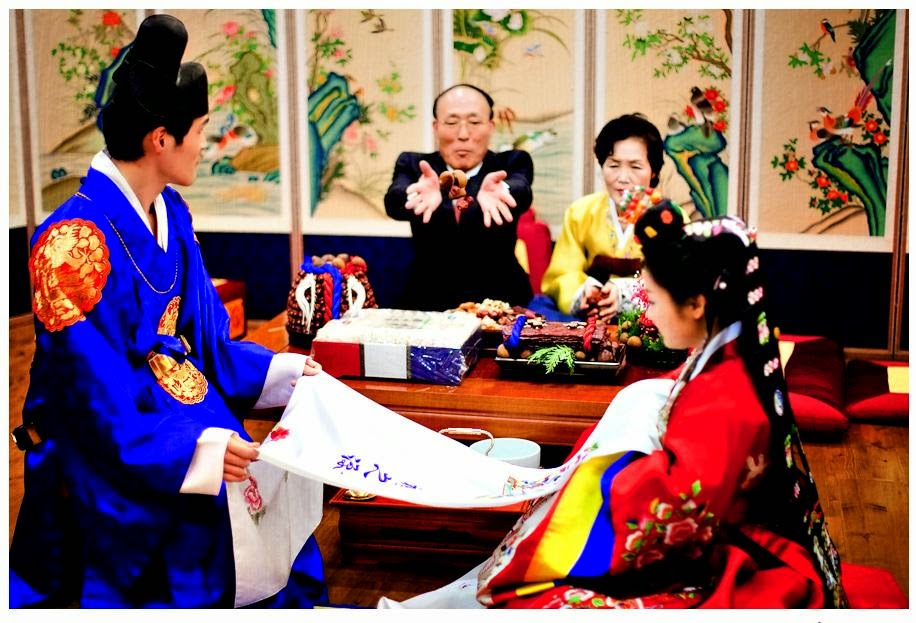 After nappye is yasik, which involves the setting of a table known as the gyobaesang. In the front row of the gyobaesang were placed jujubes, chestnuts and cookies, while in the back row were yellow beans, red beans, moon-shaped tteok and colored tteok. After yesik was completed, the families of the bride and groom prepared a gyobaesang to celebrate the occasion.
The food prepared-such as fresh fruit, nuts, cookies, and meat-was the fanciest and most elaborate of all Korean customs. However, a gyobaesang is rarely prepared today. Instead, the bride’s family prepares what is known as ibaji, or various foods, to be sent to the groom’s family. Pyebaek is the ritual in which the bride greets her parents-inlaw for the first time after the marriage. The basic items required for the pyebaek table are jujubes, grapes and liquor. Other food to accompany the liquor may be prepared additionally.

Just as all rituals change with the changing times, the honrye has changed a great deal over the years and become greatly simplified. However, many people today still seek out the tradition of gyobaeseok and the exchange of haphwanju.


Korean weddings serve Kuk soo (noodles), which symbolize long life. To find out if someone is married, ask “Kuk soo mo-gus-soy-oh?” (“Have you eaten noodles yet?”)
Posted by Virendra Rathod at 09:16 No comments: Links to this post

The Story of Korea's founding !! 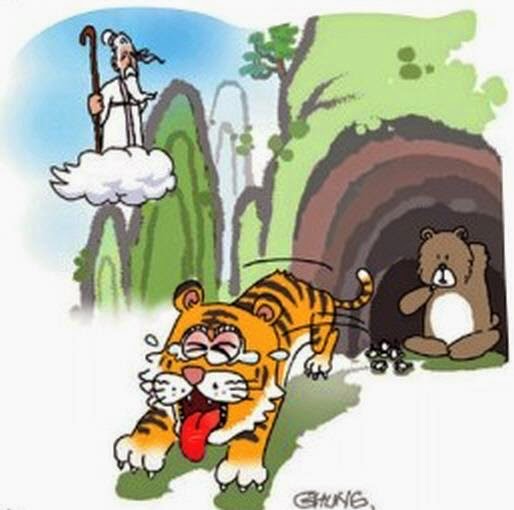 Read the story of Korea's founding myth here. It's quite interesting!!!

A long time ago, when Hwanung, son of heaven, ruled the people, there lived a tiger and a bear. They wished wholeheartedly to become human and prayed every day to Hwanung to grant their wish. Upon hearing their fervent prayers, Hwanung called them and gave them 20 cloves of garlic and a bunch of mugwort and told them that if they could stay out of the sun for 100 days living on the given food, he would grant them their wish. The tiger gave up shortly after and left the cave, but the bear remained true and after 21 days, Hwanung transformed the bear into a beautiful woman. The bear-woman, Ungnyeo, was very grateful and made offerings to Hwanung, but she became lonely. Once again, she prayed to Hwanung beneath a sandalwood tree to be blessed with a child. Hwanung, moved by her prayers, took her as his wife and soon she gave birth to a son. They named him Dangun Wanggeom, who later established Gojoseon (Acient Joseon) in 2,333 B.C., which was the first kingdom on the Korean Peninsula. 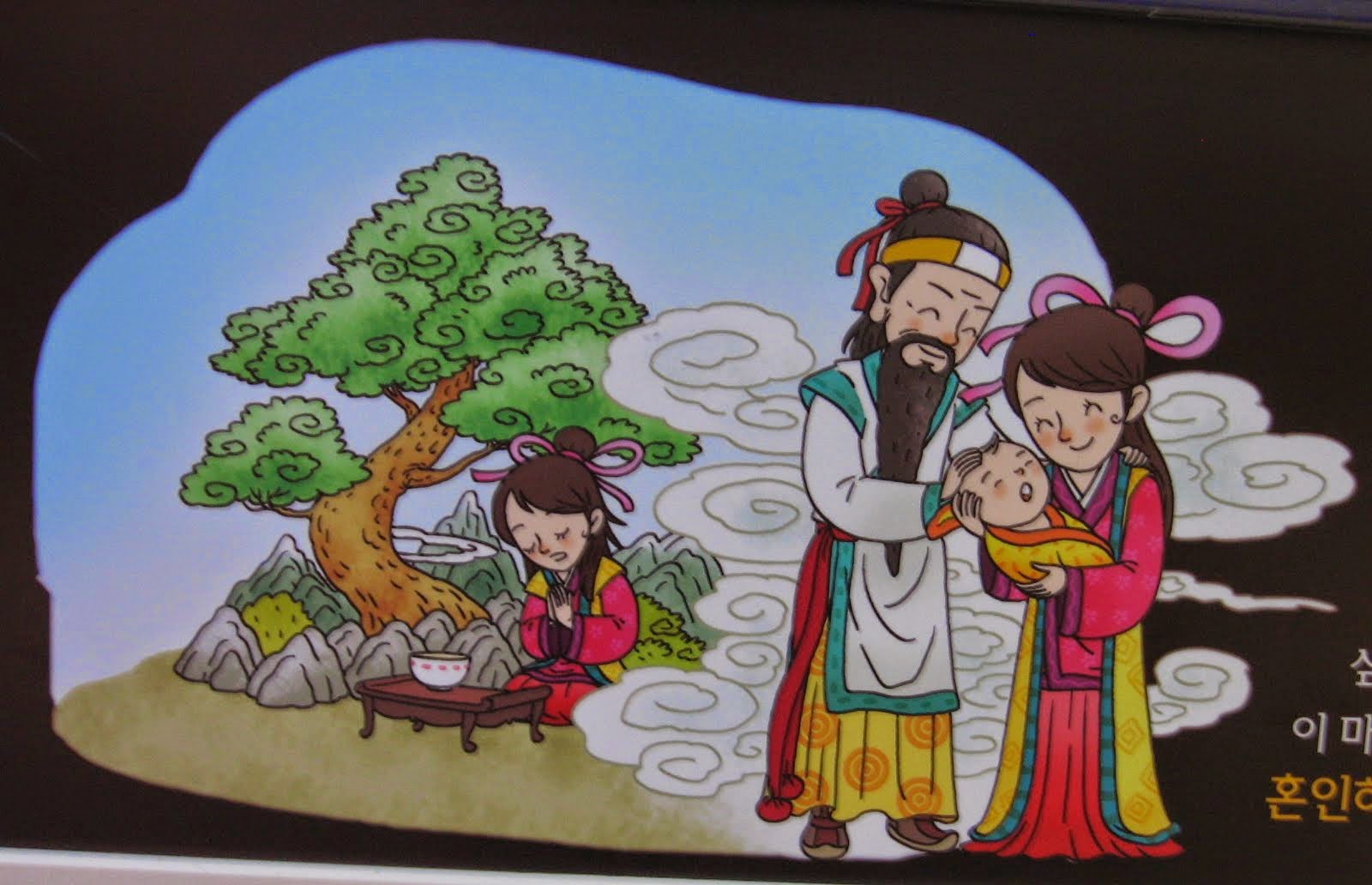 Posted by Virendra Rathod at 10:44 No comments: Links to this post