Firstly sorry for not posting for a very long time !

South Koreans have been immigrating to India since the early 1950s. The big boom of immigration occurred when Hyundai set up a bulk of its factories in Chennai in 1995. Since then the average number of Koreans coming to settle in India, even temporarily, has increased exponentially. 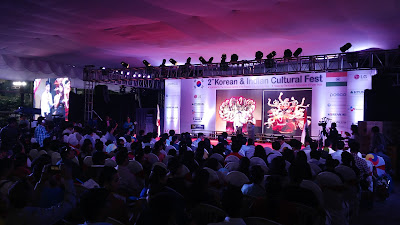 According to the Korean Association of Pune, on an average, 500 Koreans would immigrate annually 20 years ago. Now the figure has crossed 1,500 in Pune alone. Korean companies like Hyundai, LG and Samsung have expanded in India, resulting in more Korean employees coming to the country for work. The cities with the highest Korean population now are Pune (1,500), Chennai (4,000) and Delhi (3,500).


In an attempt to introduce Indians to Korean culture, the Korean Association in Pune has been organizing The Indo- Korean Cultural Festival since last year. Last year, the event took place on Saturday and had the Koregaon Park venue with Korean families dressed in Hanbok, the traditional silk Korean costume, for an evening of food and fun with their fellow countrymen.

So it was an awesome evening with many local youth performed to Korean songs & won many prizes  in lucky draws & in Singing , Dancing competition. Prizes were Air Ticket to Korea, LEDs, Tabs, Mobile handsets, Refrigerator & last but not least Korean souvenirs’ with Lotte Choco Pie to everyone present at the venue.
Posted by Virendra Rathod at 01:50 No comments: Links to this post