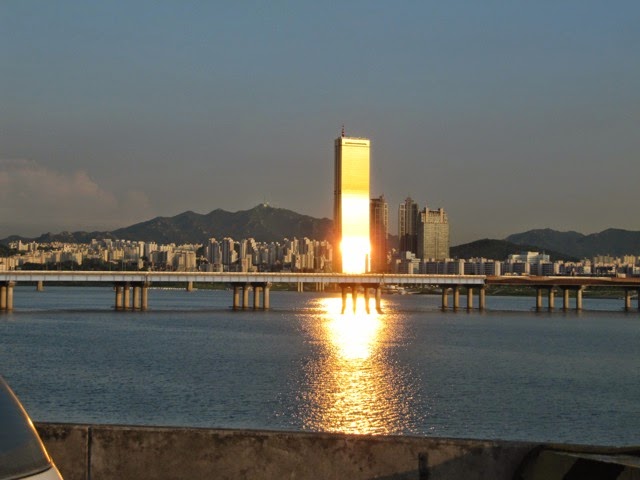 At 250 meters (819 ft) high, it was the tallest building outside North America when it opened in July 1985, and remains the tallest gold-cladded structure in the world. It stood as South Korea's tallest building until the Hyperion Tower surpassed it in 2003, but remained the country's tallest commercial building until the Northeast Asia Trade Tower was topped-out in 2009.The 63 Building was built as a landmark for the 1988 Summer Olympics. 63 refers to the building's 63 official stories, of which 60 are above ground level. 61~63 floors are restricted areas. The skyscraper is the headquarters of Korea Life Insurance, Industrial Bank of Korea Securities, and other major financial companies.
With 63 floors measuring a height of 264m, the 63 Building is Korea’s tallest and most recognized building. The 63 Building boasts spectacular views of the Hangang River and the surrounding mountains of Bugaksan Namsan and Gwanaksan.
63 Building has undergone considerable renovation and the basement floor boasts convenient facilities including 63 Sea World, 63 IMAX theater,63 Wax Museum, Korea’s greatest buffet restaurant “Buffet Pavilion,” and a host of other restaurants.

Basement first floor 16,119 square feet, basement second floor 16,724 square feet, and basement third floor (technology room) 5,515 square feet, totaling 38,358 square feet. Within this large-scale space, there are 54 regular aquarium displays, 26 special organism breeding aquariums, and other aquariums adding up to 80. In addition, specially created aquarium is 2m 10cm in height, 42m in circumference, water capacity of 200tons, and 11cm of transparent acryl. Other than aquarium displays which consist of 400 different kinds of over 20,000 of water organisms, there are also reptiles exhibitions and event hall is separately located in 63 Sea World in order to present unique ocean scenes. Ocean Family Show (seal, fur seal, diver show) can only be enjoyed at 63 Sea World. It is very unique and extraordinary which interests the audience presenting interesting scenes. 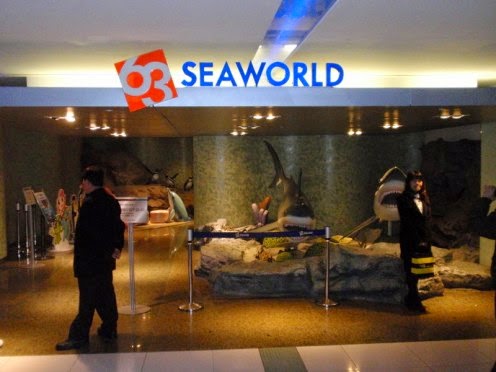 63 Sky Deck
63 Sky Deck, many visitors come every year, is 264m above the sea level, and 249m above the ground level is providing feelings as if floating above the clouds. Together with Han River’s water flow and view of the city lead it to be Korea’s representative tourist route. In addition, Sky Deck’s recreation facilities provide unique experience for the visitors and its various special exhibitions provide educational and cultural learning. 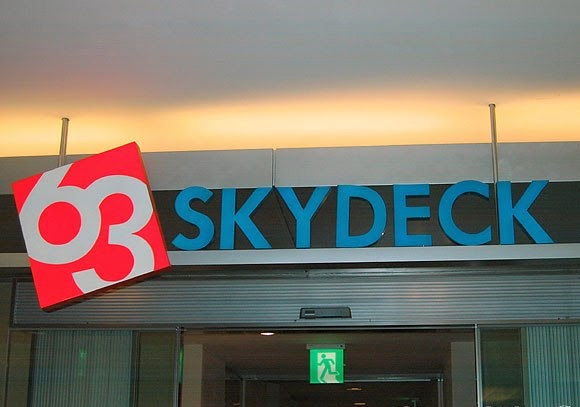 63 IMAX theater
63 IMAX theater is Korea’s the first IMAX theater which opened in July, 1985 with 504 seats. There are eight special seats for handicapped audiences and simultaneous interpretation services are available in four different languages. Surround sound system is used; there are six vast speakers in the front and two in the back for the best quality of sound. 63 IMAX theater is international standard size of six floor building and its film is ten times the regular movie, 35mm, providing three times the 70mm movie.

Hall has its elegant beauty with  it's spectacular glowing lights and ambiance inside. This not only holds the pride of having the wax figures of world's Greatest Leaders, Scientists, Painters, Musicians, Artists, Celebrities, famous Hollywood Characters and  Sport stars but also showcases larger portraits of greatest personalities which the world produced till. The waxes are depicted graciously that resembles as if you are standing besides those greatest personalities of the world who once ruled the world by their special, noble attributes and principles. As many as 70 wax sculptures including Mahatma Gandhi, Mao, Che, Einstein, Edison, Picasso, Van Gogh, Beethoven, MJ, Elvis Presley, Madamme Tussaud, Beckham, Tiger Woods etc., adore the Museum hall to enchant the visitors. 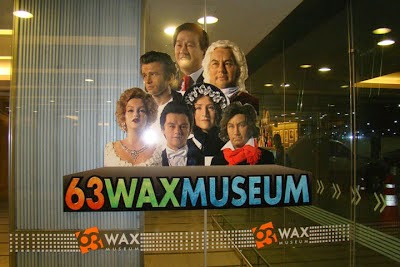 63 Buffet Pavilion63 Buffet Pavilion is the largest buffet restaurant in Korea, seating 500 people. It serves 200 dishes including Korean, Chinese, Japanese, and Western foods, as well as salads and made-to-order items. The atmosphere is luxurious but comfortable, attracting many customers. This restaurant is well-known among gourmets for its massive spread of delicious dishes. 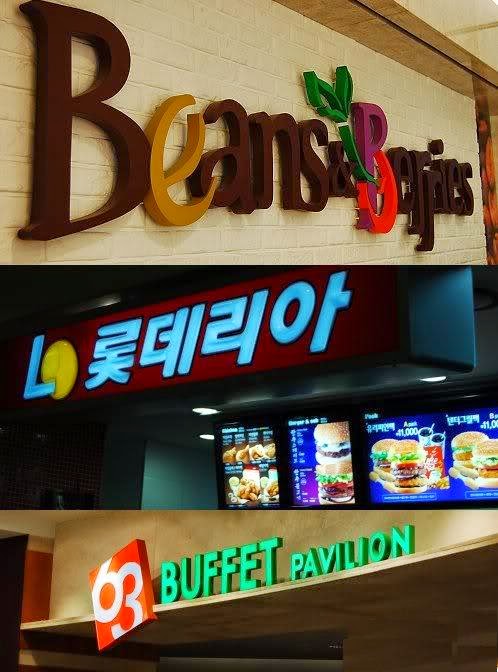 Posted by Virendra Rathod at 19:57 No comments: Links to this post 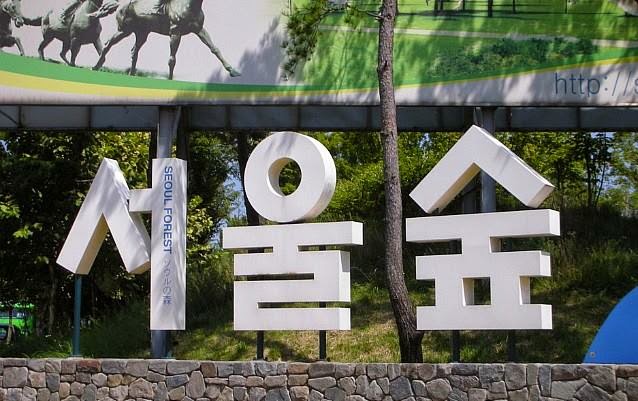 Opened on June 18, 2005, Seoul Forest had previously undergone a series of changes on Ttukseom (Ttuk Island). In the past the forest had been a royal hunting ground for kings and served as a military inspection facility. But, in more recent decades the area has served a wide variety of functions. Ttukseom initially served as a water-treatment facility, and later as a golf course, horse racing track, and eventually a sports park.

Consisting of five parks spread over 350,000 pyeong (approximately 1.16 million ㎡) of land, Seoul Forest is an eco-friendly zone appreciated not only by the people of the city but also those visiting Seoul. Seoul Forest is rapidly developing into the premium city-park of Korea like Hyde Park in London and Central Park in New York. 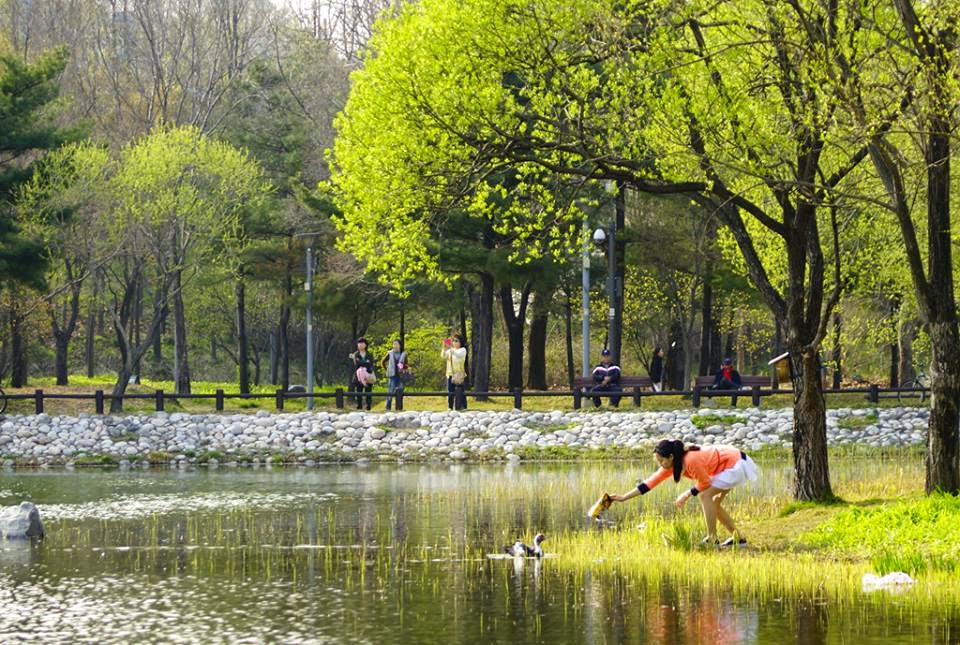 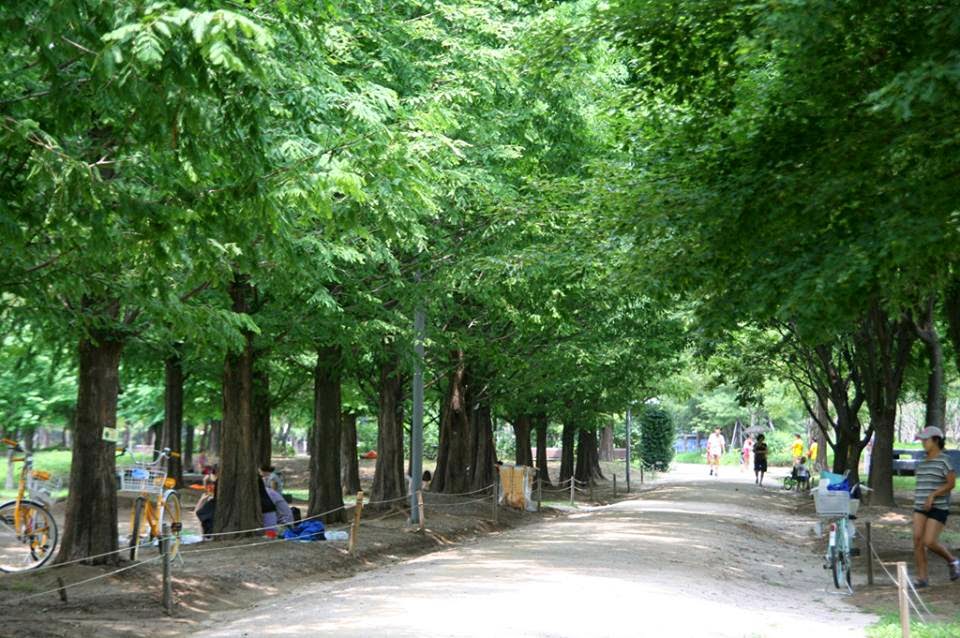 * Ecological Forest (165,000㎡)
The Ecological Forest, once an area covered by the Hangang River, has been transformed into an eco-forest connecting the Han and Jungnang-cheon (Jungnang stream). This natural habitat for wildlife animals is home to fallow deer, formosan deer, elks, chipmunks, mandarin ducks, mallards, spot-billed ducks and moorhens, there is also an observatory to help visitors get a better view of the local wildlife. 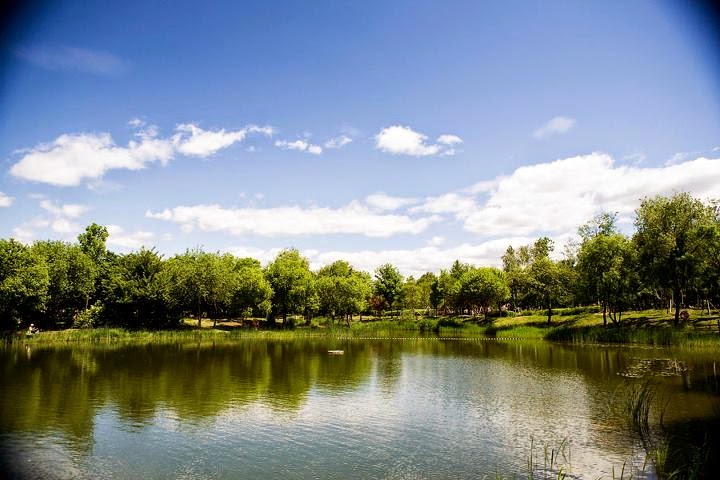 * Hangang River Waterside Park (33,000㎡)
Located southwest of Seoul Forest, this riverside area at the junction of the Hangang River and Jungnang-cheon features a waterfront park, a marina and a rest area.