Be Wary of Smart Phone Use While Walking in Seoul, South Korea 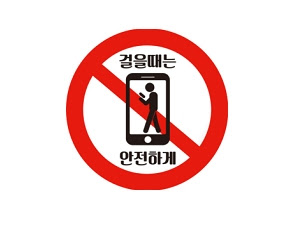 The SMG and the NPA will launch a pilot program which puts traffic safety signs and pedestrian walk signs to raise awareness of the danger of using smart phones in five areas, including Hongdae, which are full of pedestrians aged 10 to 30 and fraught with traffic accidents. 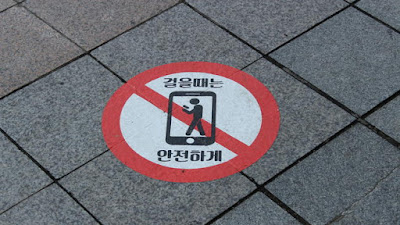 According to the Korean Broadcasting and Communications Committee, smart phone usage rate grew from 3.8% in 2010 to 78.7% in 2015. More than 60% of users said that smart phones are vital more than TV. According to research from the Traffic Safety Organization, the number of pedestrian traffic accidents due to smart phones increased from 437 in 2009 to 1,111 in 2014, a 2.5 fold increased over the last five years.
Pilot installation will take place in five areas: City Hall, Yonsei University, Hongdae University, Gangnam Station, and Jamsil Station.The SMG, along with the NPA, came up with designs and placed them where smart phone users are exposed to traffic accidents. By raising pedestrians’ awareness by using traffic safety signs and pedestrian walk signs, the SMG hopes to prevent accidents.The signs are designed to show situations where smart phone users are about to be hit by cars. The signs will also include “Be wary of smart phones while walking” to help pedestrians understand the signs. 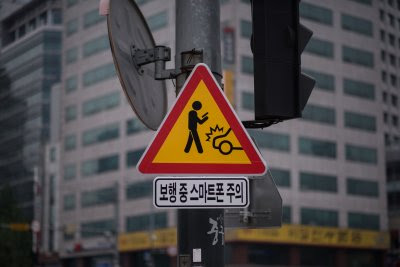 Pedestrian walk signs have “Safety first when walking” to raise awareness of the danger of using smart phones. In addition, given that many pedestrians look down while they walk to look at their smart phones, the signs were made simple but clean.
The SMG will start installing 50 traffic safety signs on traffic lights and street lights in five areas and 250 pedestrian walk signs on pedestrian roads from the Thursday, June 16th.
The pilot project will be carried out for six months until the end of the year. During that time, the SMG and the NPA will monitor the changes in walking patterns, the number of pedestrian accidents, and citizens’ responses; according to the trial, the pilot signs may become official safety signs after the two organizations review the results.
Posted by Virendra Rathod at 04:18