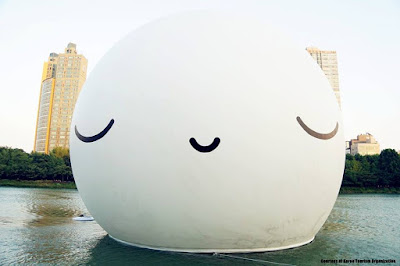 This month, there’s more than one moon on view in Seoul. A 60-foot-tall work of public art called Super Moon has been erected—or rather, inflated—within the waters of Seokchon Lake, located in a park near the Han River.
The opaque, glowing space art is the work of FriendsWithYou, a Los Angeles-based art collective that specializes in cutesy, toy-like experimental installations that are often inflatable, rainbow-colored, and illluminated. It’s like Jeff Koons meets Sanrio.
Super Moon was commissioned by a massive Seoul shopping complex opening this winter, the nearby Lotte World Tower and Mall, but this particular lake is no stranger to odd art, having hosted Dutch artist Florentijn Hofman’s huge rubber duck in 2014.
During the day, the artists have set up a cloud-shaped bounce house and cosmos-themed mascots to interact with visitors. In addition to the moon, there are eight other planetary sculptures. At night, each of the sculptures glows, and programmable LEDs shift the colors of the moon sculpture.
“Super Moon is a symbolic manifestation of the immense power and serenity of our cosmos,” the artists say in a press release. "When we gather around the moon as a community, we all orbit together,” they explain, adding that they hope Super Moon viewers “can experience this sense of unity and peace.”
It’s on view until October 3, timed to coincide with the Korean harvest festival Chuseok (often likened to a Korean version of Thanksgiving), which happens around the fall equinox each year on the full moon. This year, the three-day festival takes place September 14 through 16. 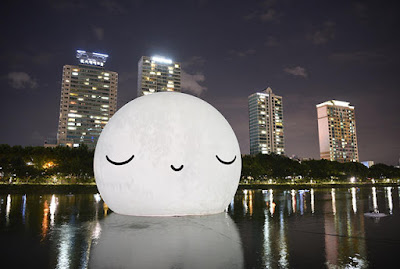 Posted by Virendra Rathod at 01:57